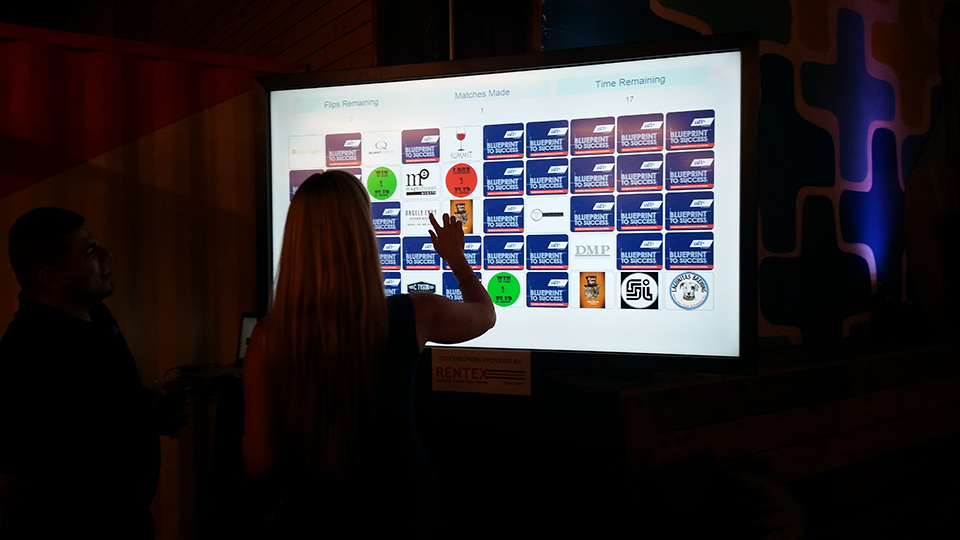 The Sponsor Match Game, customized for the AFR Showcase in 2015, was a modified version of a web application and hybrid mobile app we had previously built. Our friends at David Michael Productions asked the Origin Development team to create a concept for a game that could be played by event attendees which:

The Sponsor Match Game is similar to the children’s card game Memory, in that the player “flips” cards in an attempt to find pairs that match.  To make it easier for event attendees that may be consuming alcohol, there is no memory involved in the Sponsor Match version of the game. Each card has two sides, with the exposed side presenting the event logo, and the hidden side presenting the logo of one of the event’s sponsors. Each player, who registers at the beginning of the game using their email address, has a limited number of flips with which to find three matching pairs of logos.

The game was customized to be played on a 54″ touch screen Monitor. Players that managed to find three matching logos within the pre-configured time limit and flip limit, were given a special prize  – automatically sent to their email address upon completing the game. Players that failed to find three matching logo pairs were immediately given a consolation Starbucks gift card by the host from David Michael Productions that was monitoring the game. At the end of the night, the game provided David Michael Productions with the email addresses of every player that tried the game for follow up.